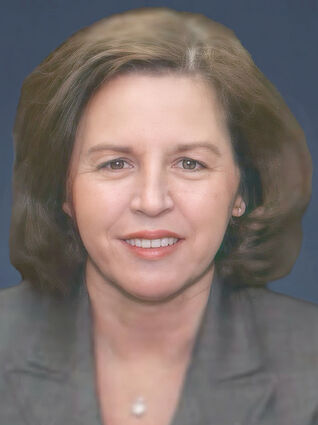 Cindy Jackson, of the McCall community, who is the current Escambia County School Board District 4 representative, has qualified for re-election and is announcing she will be a candidate for re-election on the Republican ticket for the May 24 primary election.

Jackson has served in her position on the school board for the past 11 years in various leadership roles, including vice president and board president during her two terms. She has worked with four superintendents and has completed 393 hours of certified school board instruction through the Alabama School Board Association (AASB) while attending 97 school board conferences. She said his formal board instruction included Leadership for Policy and Planning, Leadership for Community Engagement, Leadership for Financial Accountability, Leadership for Creating Positive Climate and Culture, Protecting Our Children in Cyberspace, Poverty Simulation, Student Mental Health, School Law Clinics, Pandemic Survival, and many others.

During 2020, Jackson achieved the Master Honor Roll level of certification, which is the highest level of school board instruction that can be obtained through the AASB. Before seeking her position on the board in 2010, Jackson was employed in the Escambia County School System (ECSS) for 28 and a half years, which she said has given her a sound foundation to serve in the role that a board member plays in educating students.

Jackson worked those years at W.S. Neal Middle School as a secretary and bookkeeper where she managed budgets and how to budget money for the school.

Jackson served alongside four principals at the school administration level, and also served on several county-wide committees prior to her election to the board. Jackson said she was proficient in the education accounting of federal, state, and local school funds before her election to the board, and has gained valuable experience in school administration while serving as the school board president during the 2021 school year.

During her two terms on the board, she said the system has implemented significant capital improvement projects in District 4, including the renovation of the auditorium at Flomaton High School, the construction of new concession stands at the football stadium, upgrading the football field drainage system, and upgrading the press box and public address system. She said he board was also successful in purchasing property across from Flomaton Elementary School where a new parking lot was constructed to reduce traffic congestion. Projects which are currently in the planning stage, include adding new classrooms and a Media Center at FES. Also, renovating the elementary and high school cafeteria.

Jackson said believes strongly in encouraging students to seek academic excellence in all grades and has personally sponsored a Senior Class Scholarship at FHS for each of the 11 years she has served on the school board. Jackson has also been an active supporter of the Flomaton Research Clubs' Academic All-Star Program which has enabled so many seniors to prepare themselves for college and careers.

She noted that capital improvements which have been implemented during her tenure on the board at the Pollard-McCall Jr. High School campus, included reconstruction of the school's library-media building and two classrooms which were destroyed by an electrical fire in 2011. Upon completion of the reconstruction project, the school was re-wired to current electrical standards, and three additional fire hydrants were installed on the campus to ensure an adequate water supply was available in the event of another fire. Two additional projects which were implemented to enhance safety, included adding lighting to the parking area around the gym, resurfaced the front entrance steps, and adding awnings along the front of the building where students are dropped off and picked up during inclement weather.

Jackson said she led the initiative to have air conditioning installed in county buses.

"We are excited to report the board has approved transportation funds for the installation of air conditioning on all of the school system's buses," she said. "This initiative will ensure our 4,000 students and bus drivers are able to safely commute to and from our schools under state and federally mandated COVID restrictions."

"Another positive development for our school system is that our lunchrooms are now providing free breakfast and lunch meals for all students which will enhance student learning capabilities," she said. "This expansion of the student meal program is entirely funded by a federal entitlement program. This saves many parents hundreds of dollars each month."

Having served as a school board employee herself for over 28 years, Jackson says she fully understands and supports the needs of all faculty members, school staff, and administrative personnel. Jackson said she has personally walked the hallways, visited teachers in their classrooms, held meetings with the school principals, and worked tirelessly in order to identify and supply health and safety needs that are required to keep our schools safe throughout this global pandemic.

Jackson said she has attended PTO meetings, academic and sporting events, and board workshops throughout her two terms, striving to help our school system's employees and 4,000 students, especially during the challenging days of the COVID shut down. Jackson feels she has demonstrated her leadership skills working alongside the superintendent and central office staff during the school system's transition from a traditional classroom setting into establishing virtual classrooms and delivery of hybrid instruction which has allowed our schools to remain open.

She added that as a school board representative for the Flomaton and McCall school board district, she has personally supported our Escambia County students in all seven school board districts, not just her District 4 seat. She said from the first day she was elected to the school board, she personally understands the mission statement of the school system, which states: "To provide engaging and comprehensive instructional programs that will enable our students to graduate college, and/or career-ready." She added that she fully supports this standard.

Jackson is married to Charles Jackson, who is a retired military veteran. The couple have two daughters, one is a pediatric physician in Kentucky, and the other holds an EDS degree in Education and English as a second language, and lives in Tuscaloosa. Jackson and her husband have five grandchildren. They have lived in District 4 for 47 years. They are members of Catawba Springs Baptist Church and both sing in the choir. Jackson herself is a certified volunteer fire fighter with the McCall Volunteer Fire Department, a certified instructor for the Alabama Fire College, and a CPR instructor.

Jackson says that her heart is focused on helping others and serving the needs of her school board district. She said she is committed to being a fair and caring representative for all students, teachers, support staff, administrators, and parents.