Intersection shut down for five days; back open, is closed again 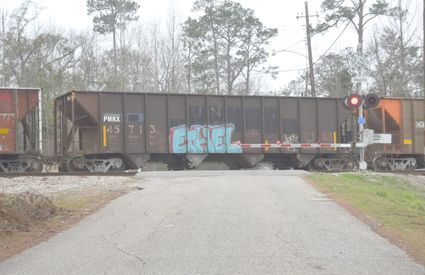 A CSX spokesperson said congestion in Mobile is to blame for a train stopped in Flomaton that blocked the College Street crossing for more than five days. The tracks were cleared Tuesday afternoon, but another train was blocking the tracks again Wednesday morning.

Cindy Schild, director of public relations for CSX, said the company apologizes for the inconvenience.

She said the congestion in Mobile is due to the large quantity of export and import products coming into the port of Mobile.

"We do apologize," Schild said Tuesday afternoon. "We're dealing with congestion and trying to clear the cars. Things are in motion trying to break it open."

Schild said safety is a top priority and noted this was an isolated incident.

Flomaton Mayor Dewey Bondurant, Jr., said he made multiple telephone calls to CSX as people in Flomaton complained to him.

After opening Tuesday evening, the crossing was blocked for more than an hour Wednesday morning with a different train.

"I talked to Cindy and she said they are trying to take care of it," Bondurant said.

Residents in the area living on both sides of the tracks said it became a real problem over the weekend.

"The bells at the crossing were ringing and driving my dogs crazy," she said. "They continued to ring until late Friday night."

Wright said she felt CSX could have at least separated the cars to open the crossing.

She said she tried to call the CSX number posted at the crossing, but kept getting an answering service.

"I never talked to a human," she said. "This is a common occurrence, but it's never been five days. They planned on leaving it there a while or they wouldn't have turned off those bells."

Flomaton Fire Chief Steve Stanton said when the crossing is closed, it hampers first responders, whether it's an ambulance, fire truck or police officer, from getting to the scene.

"We run fire and medical calls out Old Atmore Road and Highland Avenue," Stanton said. "With it blocked, we'd have to go to Century and turn back down Stateline Road."

He said it was especially difficult for a firetruck to make the right turn off of Highway 29 onto Stateline Road.

"The truck actually has to come to a complete stop and then turn into the left lane to get by," he said. "We have to run through Florida on an Alabama call and it slows down our response time. Something needs to be done, one day is too long."

Stanton said there was a bad wreck on Highway 31, west of Flomaton, Tuesday afternoon that had the road blocked. He said officers had to divert traffic at Ringold Street and send them to Century to get around.

"I was holding my breath that we didn't have a fire on the other side of the tracks," Stanton said.

Johnny Lambeth, who lives at 1535 College St., on the town-side of the crossing, said personally it wasn't a big problem for him because he normally doesn't head west across the tracks.

However, Lambeth also serves as a volunteer fireman and said that's what concerned him.

"If a house caught on fire across the tracks or if somebody was having a heart attack, it would take us a lot longer to get there," he said. "Those extra minutes could mean the difference in life or death. It could also mean the difference between a small fire to a house fully involved."

Lambeth also said he couldn't understand why CSX was able to break the cars to open up the Lambert Road crossing, but not College Street.