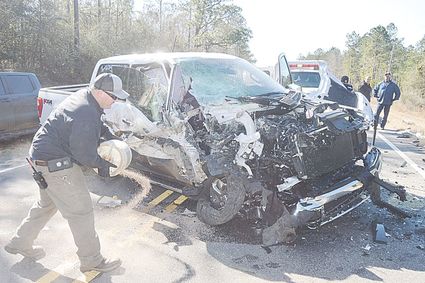 Madden's truck, above, hits head-on with Brittington's truck on Highway 31

Madden and his passenger, Anthony Bullard, were heading west on Highway 31 toward Atmore. Robert Brittingham of Flomaton was headed east toward Flomaton.

Madden said Brittingham was behind another car and then pulled into his lane as if to pass the other car.

Madden said he tried to swerve into the woods, but it was too late as the two trucks collided.

Madden said he and Bullard were both wearing their seatbelts and the air...