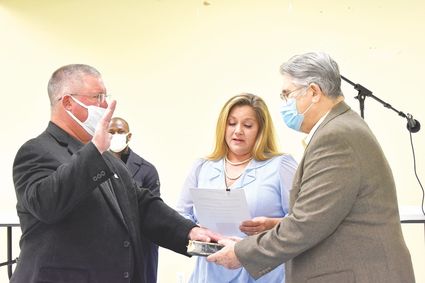 The Century Town Council approved the town's submittal of three appropriations project and funding requests to the Florida House of Representatives and Senate following the swearing in of council members Leonard White, Dynette White and Luis Gomez and Mayor Benjamin Boutwell Monday night. State Rep. Michelle Salzman was at the meeting.

The first project is a Florida Department Of Transportation safety project to mill and resurface a portion of Highway 29, intended to improve and soften the curve between Henry Street and Cottage Street, which will cost about $2.6 million. This project is expected to begin construction in FY 2022.

The second project is a water meter replacement project, which will require the town request funding to replace all of the existing meters, new software and hardware and training for a complete Radio Read system.

The third project is a well and water plant rehabilitation, which involves improvement, repairs and upgrades to the well houses.

"The town of Century has a lot of infrastructure issues," said Rep. Salzman. "I plan to be a part of the process as much as possible. I'm not going to tell you what you need to fund, I'm not going to tell you how to run your town, I need you to give me the input and I will represent you in Tallahassee. I do have a great working relationship with Sen. Broxson who also has a big heart for Century."

Rep. Salzman's determination to get help for the town was strong, and told the council and mayor not to be discouraged if requests have to be re-submitted or are not approved the first try.

"What we don't get this year, we ask for again next year," said Salzman. "Basically, infrastructure is a priority, and small townships are something the state likes to look after, especially those, like Century, that don't have the tax base to do what is needed."

Salzman explained that a request goes to her, and she gives it to the state. She emphasized that one should be in the house, and one in the senate. She said once it is presented to a committee, the only worry is the governor vetoing it.

"We are in a bad tax year this year for income, but I will fight the whole way through, anything I can do for Century I will, it doesn't fall on deaf ears," said Salzman.

She stated that many times, when an appropriations bill is filed, there is an opportunity to work with state agencies that provide infrastructure or different things for communities.

"This is not the only opportunity for us to help you find funding," she said. "Grant projects open up and this is a stepping stone, we can work toward funding in other capacities. It's worth trying, to make this a partnership."

Salzman encouraged the town to present to her on paper the bigger projects, such as the $8 million water treatment and wastewater project the town has been working on so she can get Sen. Broxson on board.

"Incremental changes are great, but what harm is there in trying to get out there and get it done?" said Salzman. "I'm only here to learn from you all. I look forward to working with you. I'm really excited."

Salzman said she would do the research to make sure that projects that have already been submitted are not resubmitted, which she said may cause problems.

Prather said the deadline for appropriations project requests submittal is the first week of February.

Councilwoman Sandra McMurray Jackson thanked Rep. Salzman for her willingness to work with and represent the town of Century.

In a motion made by Jackson which was seconded by Councilman James Smith to approve town planner and town engineer to work together for the preparation and submission of an appropriations project request to the House and Senate for each of the three projects. The motion carried unanimously.

In other business, Mayor Boutwell and the council presented a plaque of appreciation to former interim council member Brenda Spencer, who was on the phone for the meeting, recognizing her for the six months she served as council seat 3 when Boutwell stepped down to run for mayor.