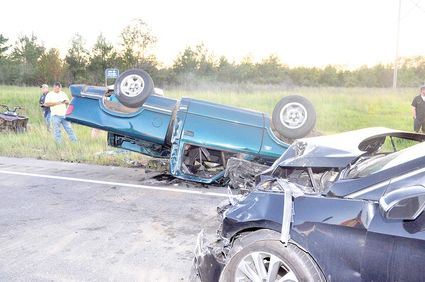 Vehicles collide at the intersection of Highway 113 and Wolf Log Road, injuring one

The setting sun late Monday may be a contributing factor to a collision at the intersection of Highway 113 and Wolf Log Road that seriously injured one of the drivers.

Dakota R. Joiner of Flomaton was headed south on Highway 113 when a vehicle driven by Taylor A. Messmer, traveling east on Wolf Log Road, apparently ran the stop sign and collided with Joiner's truck, causing it to overturn.

Joiner was transported by ambulance to the Flomaton Fire Station and then airlifted to a Pensacola hospital. An update on injuries was not available. Messmer refused medical attention.

"That's been a bad intersection for me over the years," Stanton said. "I couldn't count how many wrecks or fatalities have happened right there."

Stanton said in most instances, the vehicle traveling west on Wolf Log crossed into Highway 113 because the west-setting sun blinds them.

When asked whether he felt rumble strips on Wolf Log would help the problem, Stanton said he felt they would definitely help.

"I drive that road often and it's tough to see when you're heading west," he said.