The long history of Canoe School:Part 2 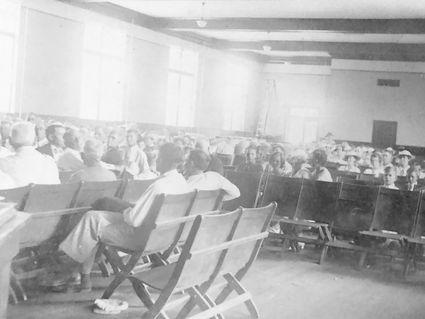 Canoe School and its auditorium opened in the early 1920s

Schools and education have always been a prime concern in the Canoe area. According to Annie Waters, History of Escambia County, a log school was constructed early in Canoe's history. Records show that by 1894 there were three schools in operation with an enrollment of 80 pupils.

The schools in that long ago era were famous for their teachers, and Canoe had a true colony of teachers throughout much of her history whereby education and culture was passed from one generation to the next. In the 1890s, Mrs. Watson, Hattie Terry and Sally Smith were instructors at two of the schools. Mr. W.J. McCants, originally of Monroe County, also taught school at Canoe.

Miss McKittric of Evergreen, who, according to Mrs. Waters book, later married D.L. Leatherwood, taught at the third school in Canoe.

By 1896 Canoe had combined its schools from three to two and W.B. Boggan led the high school. Mr. Boggan is believed to have been a Confederate veteran and to have published a textbook on mathematics.

Miss McKittric and Mr. Boggan created much enthusiasm in the community by a well-advertised spelling match between the "Yankees" of Miss McKittric's school and the "Grays" of Mr. Boggan's school. The "Grays" carried the day.

A three room, wood framed structure also served the community as a school and the Rev. Q.E. Wells was principal. Wells came to the area from the Luverne, Alabama area and was a much beloved preacher, farmer, businessman and educator. The Q.E. Wells Scholarship Fund at Robinsonville Baptist Church is named for him in that he was a long serving pastor at the church during the 1930s.

The elementary school of Escambia Academy was constructed in the early 1920s as a public school and this is perhaps what comes to mind most frequently when one thinks of Canoe's schools. According to Wiley Farrar, a German immigrant and his sons constructed the school. In 2007, Mrs. Carolyn Conn told this writer that in return for the county paying for the school, the locals were required to dry it in, wire it and do other work.

H. Doehring began construction of the brick building, with five classrooms and an auditorium in 1923. On September 14, 1925, the school opened. There was no indoor plumbing or running water until the 1943-44 school year. Each classroom was heated with a large cast iron stove. Mr. Charles Lowery told this writer in 2006 that he remembered walking to school in the winters of the 1930s with the sound of frost cracking beneath his feet and that during the rainy season the outdoor bathrooms would often be flooded with water.

According to written, primary sources in the possession of the Canoe Civic Club, the school had many teachers over the years. Mrs. Vivian Young, years ago wrote of those days. "Rebecca and Jim were first in my family to go to Canoe Elementary School. Rebecca was sickly (asthma) and did not go as early as most of us. She attended with Jim, beginning when Jim was five," wrote Mrs. Young.

"I began in 1923, at the age of five," added Mrs. Young. She noted that Mrs. Miranda Horn was her first and second grade teacher. The 1925-26 third grade year saw her in Miss Willie M. McNeil (Hall) as teacher. The fourth grade year saw her in Mrs. Cater's class. Some of her other teachers were Mary Gauge, Elizabeth Dillard, Stella Walker and Grace Chestnut. Some of Mrs. Young's family rode the train known as "The Short," to school in Atmore. Mr. Henry Marshall was a local school bus driver.

Today Canoe sits along Highway 31 with the railroad and the highway being the lifeblood of commerce that passed through this community which is older than Escambia County. A historic marker at Baker's Grocery tells of her history and her people. The old drug store sets converted to the Canoe Civic Center. Yet Canoe is more than just stores, a few old buildings and a caution light.

The story of the people who built Canoe is a story of hard work, challenge and perseverance. Where neighbors cared for one another and children played from yard to yard in an era when residents could sleep with unlocked doors at night. It's a unique place with special people. The Canoe Civic Club recently sponsored a bill, which Rep. Alan Baker has diligently saw to its placement on the 2020 ballot as a referendum to designate Canoe as a Landmark District. The referendum doesn't affect property or zoning, it simply designates Canoe as unique and requires any municipality seeking annexation to hold a referendum on such a decision.

Please support the Canoe Landmark Referendum to honor and designate this special community as a unique and historical site in Escambia County, Alabama.

Next week: How three sisters had a lasting impact on Canoe's schools and the community.

Shadows and Dust Volume III: Legacies is available for purchase in the amount of $30.00+$5.00 shipping and handling to PO Box 579 Atmore, AL 36502 or visit Lulu Publishing.com; Amazon.com, Barnes and Nobles.com OR at the Monroe County Heritage Museum in Monroeville, Alabama.