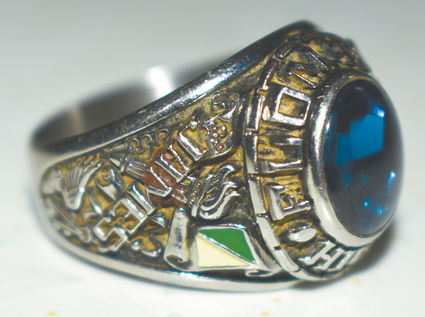 Flomaton High School graduate James Bagwell never imagined that a ring lost on a trip to the creek with friends in the summer of 1987 would be returned 33 years later through the kindness of a stranger in California.

Bagwell had gotten his class ring in the summer of 1987, just before his senior year in high school.

His parents had just bought the ring for him. He was wearing it he and some friends went to the creek on a Saturday night to have some fun. As the night grew late, the five friends began horse playing and throwing rocks at each other.

"When I got back to my truck, I realized the ring was missing," said Bagwell. "I went back the very next day to look for it, afraid my parents would kill me if they found out, but we never found the ring."

"My mom never calls that late, so when she called me, I thought something might be wrong," he said.

When he answered, his mother began asking him about something he may have lost about 32 years ago. He didn't remember losing the ring at that moment and began guessing other pieces of jewelry.

"No way, you've really put me on the spot to think," Bagwell told his mother. "I didn't know what she was talking about."

She teased him with a couple of hints and finally said, "What about your class ring?"

"I said, 'What about it?'" said Bagwell. "The last time I saw it I'd thrown it in the Big Escambia Creek."

It was then she finally told him she had it in her possession. Bagwell was in disbelief. He said his class ring was the last thing he would have ever thought she was referring to.

Nick Roberson, who teaches and coaches at the high school, had delivered the ring to Bagwell's mother, Patricia.

The next morning, on his way to work, Bagwell went to his mom's house. He was so excited and wanted to make sure, in order to really believe, and see with his own eyes that ring from more than three decades ago.

"I was like, 'Wow!'" said Bagell, when he got his hands on it. "It was in amazing shape! I'm sort of still in disbelief!"

In the years 33 years that have passed between 1987 and 2020, the ring somehow made its way to the state of California, where it was recently a part of a 23-pound lot of silver costume jewelry purchased from Goodwill Industries online that was in a region of Georgia.

The purchasers, Roger and Samie Watson, of northern California, own a small shop and sell jewelry, antiques and collectibles, where the ring wound up.

Watson reached out to Flomaton High School last week to find the owner of the ring and possibly return it. They originally contacted the alumnus through Facebook, but had not gotten a reply. So they emailed the school directly.

Wanda Ledford, who works at the school, received an email from the Watsons. 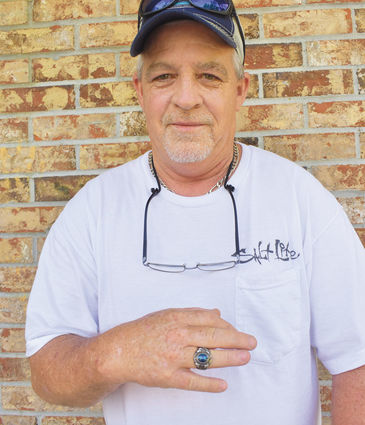 'I am not sure if anyone is interested in this ring but I just did not want to give it back to Goodwill just to have it discarded again,' wrote Watson. 'I know this is a difficult time for everyone and school is closed but please let me know if the school has any interest in this beautiful class ring. Thank you.'

The initials 'JPB' were engraved on the inside and '88' and 'James' were embossed on the outside of the ring. Hammond told Ledford he knew the ring belonged to fellow classmate James Bagwell, who had graduated with Hammond in 1988 from Flomaton.

"This is just God," said Bagwell. "I wish it could have had a camera on it to see the journey."