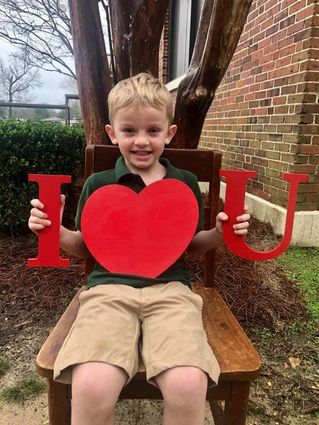 Those who knew Trayton Gage Adams talked about his smile. They talked about his big heart and the hugs he loved to give. Six-year old Trayton died last Thursday when he was riding on the back of a four-wheeler that turned over pinning him underneath.

Trayton had just finished kindergarten at Flomaton Elementary School, but that smile will always be etched into the minds of the principal, his teacher, his classmates and others who knew him.

FES Principal George Brown said the news of Trayton's death has taken a toll on the entire school even though students are no longer in the classroom.

"He was always smiling," Brown said. "He always wanted to hug me in the hallway. He loved all of his friends, smiled hard and loved hard."

"I never saw that kid in the school without a smile on his face," Brown added.

Brittany Brown was Trayton's kindergarten teacher and said her heart sank when she heard the news.

"I feel extremely heartbroken," Mrs. Brown said. "You don't expect one of your students to die. It's not supposed to happen. He was such a joy to be around and always had a smile on his face."

"He hugged me all day," she added. "He was just so excited to be in school and had a lot of friends."

"It's something I've never had to deal with before," she said. "They become like your own children when you have them in the classroom. It's so sad. In a small school like this it's like losing a family member, it breaks my heart."

"He was such a sweet boy and a joy to teach," she said. "You just adored him."

Mrs. Brown said she's been in contact with several of the other parents of students in her class who were equally shocked by the news.

The other parents and teachers went in together to purchase flowers for Trayton's funeral from the kindergarten class to show their love and support.

Flomaton Police Chief Chance Thompson said dispatch received a 911 call at 6:23 p.m. Thursday, May 28, in reference to a child trapped under a four wheeler. Thompson said the crash occurred off Jordan Road on what he described as a dim road or trail. Trayton was a passenger on the four wheeler that flipped and landed in a mud hole with Trayton trapped underneath.

Thompson said emergency personnel did everything they could to save him. He was transported by ambulance to the Flomaton Fire Station and airlifted to Sacred Heart where he was pronounced dead.

"The whole town's grieving," Thompson said. "I didn't know the child personally but he's a child of our community. It breaks your heart. It literally makes you sick to your stomach. My prayers go out to the child, his family and the entire community."

"I saw a bunch of old men, including myself, start crying when we realized there wasn't much more we could do," Stanton said. "When you see children like that it really hits hard. It's not supposed to happen that way."

Trayton was a native of Brewton and a lifelong resident of Flomaton. He attended New Beginnings and Flomaton Freewill Baptist Church. He also attended the Friendship Learning Center.

Visitation will be held from 1 p.m. to 2 p.m. Thursday, June 4 and the funeral will be held at 2 p.m., at Williams Memorial Chapel Funeral Home in Brewton with Bro. Bo and Sam Bell and the Rev. Nathan Brown officiating. Burial will be held at Pollard Cemetery.