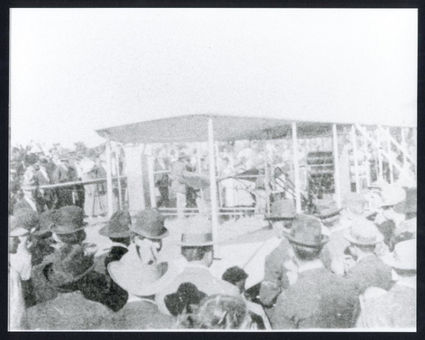 Fowler's landings, like this one in Texas in November 1912, stirred interest among locals wherever he went.

Aviation's golden age saw much excitement in the small towns of America. Barnstormers, daredevils and the wide open skies called to thrill seekers everywhere and many of these took to the air. It was into this age of exploration that Flomaton and Century found an early footnote in history.

According to an article in Biloxi's Coastal Breeze newspaper, a transcontinental flight, which had started in California, left Biloxi after refueling on January 10, 1912 about 1pm. R.G. Fowler was the pilot and after departing coastal Mississippi he headed towards Flomaton.

Fowler arrived in the Flomato...