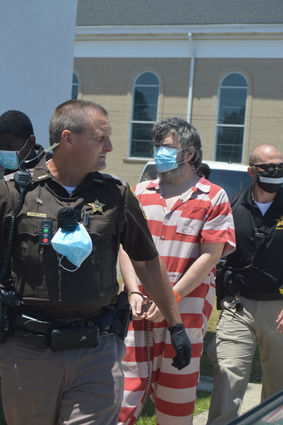 An East Brewton man was arrested Monday on five counts of possession of child pornography after nude and semi-nude photos of girls as young as 8-years old were found on his cell phone and included a video of an adult male having sexual intercourse with a girl estimated to be about 10-years old.

Rabon appeared before Escambia County District Judge Eric Coale and was given a $500,000 bond for the five Class C felonies.

Escambia County Sheriff Heath Jackson said there is no indication that the images and video found on Rabon's cell phone involved local girls. He said Rabon's cell phone and computers taken from his home have been turned over to the U.S. Department of Homeland Security to conduct a forensic investigation of Rabon's electronic devices.

Sheriff Jackson said an investigation was launched after numerous parents complained about inappropriate comments and messages Rabon had posted on social media.

Jackson said some of Rabon's posts targeted Facebook photos where parents or grandparents had posted photographs of their small children and grandchildren and he responded with lewd comments like he could see through the bathing suit or was offering to take private photographs.

The joint investigation was launched and officers executed the search warrant at Rabon's Williamson Street residence Monday. Officers seized his cell phone and computers in the house.

"The investigation is continuing and further charges can be expected," Sheriff Jackson said.

In addition to the video found on his telephone showing an adult male having sex with a child, photos showing pre-pubescent girls showing their breast area, buttocks and pubic area were discovered.

During Tuesday's bond hearing when Judge Coale asked Rabon if he was aware of the charges against him, Rabon said he was not sure. Judge Coale told Rabon he was charged with five counts of possession of child pornography and asked if he wanted details of each count read. Rabon declined.

It was noted at the bond hearing that Rabon has no prior criminal history.

In addition to the photographs and video found on Rabon's phone, Assistant District Attorney Kim Pettis said he was soliciting minors via social media and that other charges from other counties were coming.

Sheriff Jackson asked the judge to give Rabon the highest bond possible and not less than $500,000 and said he felt with the charges against him he would be a flight risk. Jackson and Pettis also said if Rabon was able to post bond he should be required to wear an ankle monitor.

"I just want to go back home under any restrictions," Rabon said to the judge.

In his order on the $500,000 bond, Judge Coale said if Rabon was released he would be required to wear an ankle monitor, have no access to any electronic devices and have no contact with anyone under the age of 18.

Rabon told the judge he was unemployed and didn't know how much money he had in the bank. Coale then said he would appoint the public defender's office to represent him, but he had the option to hire his own attorney if he wished. Judge Coale also told Rabon he could request a preliminary hearing within 30 days of his arrest.

Sheriff Jackson said if anyone has any information or has been contacted by Rabon, they are asked to call the sheriff's office at 251-809-0741 and request to speak to Inv. Bruce Shue.