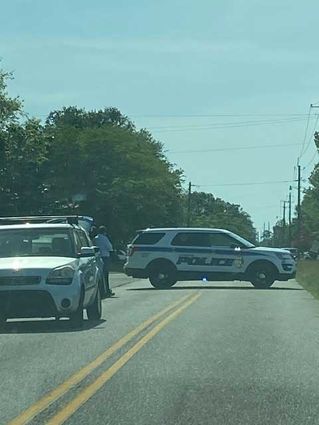 Police shut down roads around Sneed Drive while negotiating

An Atmore man who threatened and held his parents at gunpoint was arrested Tuesday evening after about a 12-hour standoff with police that ended after officers used tear gas and took the suspect into custody with nobody getting hurt.

According to Chief Brooks, James went outside about 5 a.m. Tuesday to smoke a cigarette and his father followed. The two got into an argument and James fired a warning shot into the air. They went back into the house and James pulled a gun on his mother and father, threatening to kill them and bringing up things from the past.

The standoff between James and his parents lasted about two hours before his mother got out of the house, went to a neighbor's house and called the police.

Brooks said police got the call about 6:50 a.m. about a domestic dispute on Sneed Drive. Brooks also noted the father was able to exit the home.

Brooks said officers set up across and down the street and tried to reach James by telephone but got no answer.

SWAT teams from Monroe County, Baldwin County and the Alabama Law Enforcement Agency were dispatched to the scene.

He said they had negotiators on the scene who were able to make contact with James through text messages. He said about 4 p.m. James quit responding to the messages.

"He was threatening to kill the police if they came into the house," Brooks said.

About 5:30 p.m. the SWAT teams decided to fire the tear gas into the house.

Brooks said about 8 p.m. James was seen near a window in a back bedroom and the SWAT team was able to get him out of the house with no injuries.

During a bond hearing Wednesday afternoon, District Judge Eric Coale set James' bond at $500,000. It was also noted that James was out on bond on trafficking charges in Florida.

Part of his bond agreement was for James to have a mental evaluation.