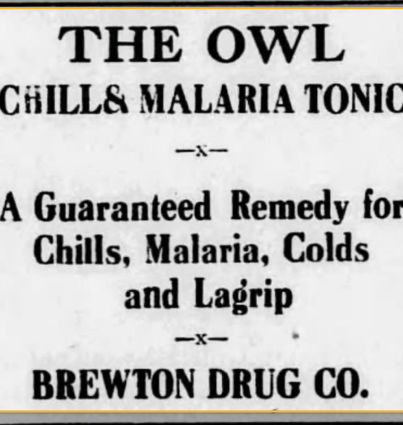 Ad from a Brewton newspaper during the height of the 1918-1919 Flu Pandemic. Lagrip was another term for the flu.

For those who think history boring, or not worth teaching or studying perhaps they should take a look at history's lessons when it comes to the growing pandemic known as the Corona virus, also known as Covid-19. As horrible as the potential outcomes may be, the lessons of another pandemic 100 years ago may offer lessons which could prevent, or at least slow transmissions.

By November 1918 World War I was at an end. As many a war-weary family prepared to welcome their soldier home, a new invasion was waiting to unleash its torrents upon the nation. In the early days of the invasion of the 1918 Flu epidemic many a person probably knelt in prayer wondering if the disease sweeping the world was one of the plagues mentioned in the book of Revelation.

According to Medicalnewstoday.com, an epidemic, is when the number of people infected with a disease rises well above what is expected in a country or region. A pandemic covers a much wider geographical area, often worldwide and is a much more severe outbreak.

The pandemic that killed 675,000 Americans and around 5 percent of the world's population during the period of 1918-1919 was called the Spanish Flu. Yet the name was misleading. At the time people believed it was worse in Spain or that it had originated in Spain when in reality, Spain's news media had no restrictions and was reporting openly on the flu. However, in 1918, the media in the US and Western Europe was heavily censored because of the war effort. Therefore the Federal government didn't want Americans to know how bad the epidemic had become.

Furthermore, President Woodrow Wilson would not publicly mention the epidemic out of fear of creating a national panic. Yet perhaps if a national shut down of a few days occurred, perhaps early transmission rates could have been slowed. This would likely have been similar to what the US government did in the 1930s to save the banks (banks were in a state of panic during the Depression and the Federal government ordered a Bank Holiday of several days to allow the panic to pass).

Newspaper reporting locally was also affected by Federal censorship and this slowed knowledge being available to the general public. The Monroe Journal, in November 1918, reported that the Spanish Flu originated in Spain and that it was no different than what was seen in the US during the winter of 1889-1890, this was totally wrong but The Monroe Journal was likely reporting what had went out on the national news wire. The outbreak that winter of 1889-1890 was called the Russian Flu, yet the two types of flu were very different. The most lasting impact of the Russian Flu epidemic was the term "Lagrip" as a nickname for the flu.

Around the same time the trenches of WWI were beginning to see the first cases of the flu; it also struck mining communities in Alaska. The small community of Brevig Mission witnessed the virus decimate 90 percent of the population. There were scores of corpses every where in the town and survivors refused to touch the bodies or remove them. The Alaskan government eventually hired gold miners from Nome to come in and bury the bodies in the permafrost. In 2005, research from a well preserved female corpse allowed the full genome of the viral RNA to be sequenced, yet it did not explain what caused the Spanish flu pandemic.

Meanwhile in Europe, the flu spread across the battle lines and infected Allied soldiers. The sickest men on the front lines were put on trains and sent to hospitals in the rear and thereby spread the disease all along the way. Men who were not as sick with the flu stayed in the trenches at the front lines and therefore the weaker strain of the disease did not spread to the general population and therefore more people caught the more dangerous strain.

What made matters worse is that a soldier may have been healthy in the morning, come down with fever and chills by lunch and be dead by nightfall. Such was the dramatic nature of this strain of flu. This strain of flu also caused people to bleed from their mouth, nose and eyes. The lack of oxygen in their bodies caused some to turn black and doctors sometimes had trouble determining the race of the patient.

It was a very unusual type of flu, quite unlike anything which had previously been seen. Traditional strains of the flu had attacked the old and the very young in greater numbers than young and middle aged adults.

However, in this outbreak, the group hit hardest was those in the age group 18-40. The disease would cause people with seemingly strong immune systems to basically go to war with their own bodies and thereby become sicker at a faster rate than older people or the very young.

Locally, residents of Alabama and Florida felt the outbreak as well.

The first reported cases in Alabama arose in Madison and Conecuh Counties on September 28, 1918. Dr. J.W. Haygood, health officer for Conecuh County, reported six cases which had mostly been attributed to family members working in Pensacola and carrying the flu back home. Similar cases were reported in Brewton and Atmore. Families suffering from the disease were encouraged to wrap a black ribbon around their porch posts to warn the passer-by of the danger.

During this period there was a large amount of military construction going on in the Pensacola area and around Fort Pickens. Local workers, such as carpenters and brick masons, would often go to Pensacola and work away from home to provide for their families. By October 7th, the governor's office had ordered all public places closed until further notice. The flu condition was taking a toll on the economy and local services by this time. Stores were closed either by choice or because employees were too sick to work. Telephone companies had to limit their switchboard operators to only emergency calls because so many operators were sick there was no one to man the switch boards. Meanwhile, circuit judges around the state were forced to suspend their court calendars to control transmission of the disease. Local newspaper accounts detail that the Steadam School was closed due to the flu but it was not the only one to be closed.

By October 15, 1918, Alabama authorities noted that 25,811 cases of Spanish Flu had been reported. State officials were overwhelmed in treating the pandemic and it is likely that these numbers were under-reported. In some parts of the state, coffins were in short supply and the dead had to be stored in freezers until coffins could be shipped in.

As the disease progressed between late 1918 and early 1919, people begin to develop immunity to this strain of the flu and eventually the infection rates began to decline. Yet it was not until the summer of 1919 that the pandemic ended.

As the Covid-19 virus begins to spread unchecked around the world, it would serve politicians and healthcare professionals to review the records of our grandparents and great-grandparents as to how they weathered the storm of a world wide pandemic in an age before I-phones and the internet.