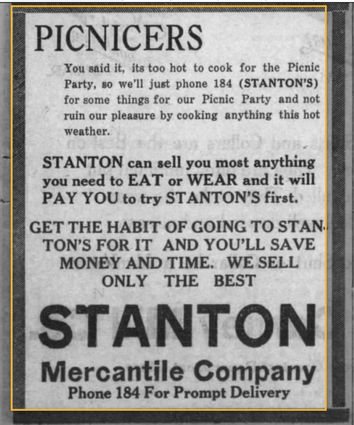 Ad from June 19, 1924 PE Stanton store which was at the intersection of what is now Highway 31 and Canoe Road South

In the old days, meaning that time before the early 1960s, when many of the tiny communities in our area seemed to prosper and their residents had more of a home view than a world view, there existed small places like Malta and Dugout which had a big influence on farming and industry.

The exact origin of the name 'Dugout' is clouded in the fog of history but some say it comes from a train wreck that "dug out" a hill or from a dirt pit which operated there at the time of the construction of Highway 31 in the 1920s.

At one time, an agricultural conglomerate from up North held commercial interests in the area. The company went bankrupt, probably as a result of the Great Depression, and the land was broken up and sold. Much of the title history of the deeds from the area trace this company's ownership.

Yet it's the story of a train wreck in the area in the early 1900s that stirs the imagination as to the origin of the name Dugout.

According to The Pine Belt News from May 3, 1906, "A rear-end collision occurred between two freight trains on the Louisville and Nashville Railroad at 4 o'clock Tuesday morning one mile east of Canoe...."

The story goes on to state, "The engine and a number of cars were thrown from the track delaying traffic for several hours. A negro fireman was the only one injured and he only slightly." Could this impact have dug into the hill side of east of Canoe and thereby garner the name we know as Dugout?"

There were many train wrecks in the early part of the 1900s along the train tracks of the area. The early 1920s witnessed a major train derailment in downtown Canoe when someone left a switch open and a passenger train slammed into a potato shed, likely owned by P.E. Stanton. A young boy working in the shed was killed. The baggage car of the train turned on its side and luggage and clothing was scattered throughout the main thoroughfare of the community.

Other train wrecks garnered great attention in the Canoe/Wawbeek/Malta area over the years but none had the effect of having an area like Dugout named for its effect on the landscape.

Available now: The Butler Street Chronicles; Selected histories of the communities surrounding Butler Street and will include information on settlers at Steadham, Pond Fork, Sizemore, Sardine, Butler Street, Hollinger and other communities along this route. Pick up your copy for $15. Copies can be published from the author or at Amazon.com or Lulu.com.