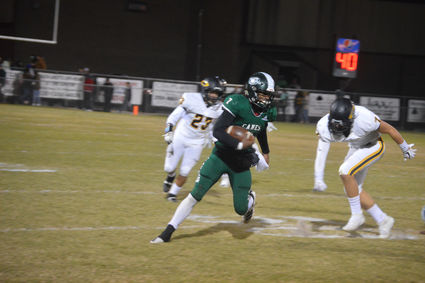 Johnson (7) turns the corner on Opp

Flomaton High School opened the 2019 playoff season with a dominating 58-28 win over Opp in a game that saw the Hurricanes score on offense, defense and special teams.

"We were locked in," said Flomaton head coach Doug Vickery. "It was a total team effort offensively and defensively. We were firing on all cylinders."

The win moves Flomaton to the second round of the Class 3A playoffs this Friday when the Hurricanes host St. James from Montgomery in a 7 p.m. kickoff.

Flomaton and St. James both enter the game with identical 10-1 records. St. James defeated Oakman 23-20 this past Friday night to advance to the second round.

Coach Vickery said there's no time to look ahead and his players and coaching staff are taking it one game at a time.

"It's single elimination football now," Vickery said. "Win and you advance and lose and your season is over."

But looking ahead to a repeat trip to Jordan-Hare Stadium in Auburn for the state finals, Flomaton could see some familiar foes along the way – at home in Flomaton.

T.R. Miller (9-4) defeated previously undefeated Pike County 25-13 Friday night in Troy to advance to the second round. The Tigers travel to 8-4 Montgomery Academy this Friday night and if Flomaton and Miller both win, T.R. Miller will come to Flomaton next week for a quarter final matchup.

If Mobile Christian continues to win in the other bracket, the Leopards will travel to Flomaton to take on the Hurricanes in semi-final action.

This past Friday night, Flomaton kicked off to begin the game and Flomaton's William Morgan recovered the ball to give the Hurricanes a first down at its own 45-yard line.

Daquan Johnson later scored on a 39-yard touchdown run. A two-point attempt failed, but Flomaton led 6-0 with 10:25 left in the first quarter.

Following the kickoff, the Bobcats began at their own 43 but three plays later faced a fourth and 2 situation. Opp lined up to punt but called a fake that was stuffed by the Hurricane defense and Flomaton took over at its own 48.

Franklin scored on a 7-yard run and the two-point try failed giving Flomaton a 12-0 lead with 4:31 left in the first quarter.

Opp started its next possession at its own 41, but Nick Turner intercepted a pass and returned it 45 yards for a touchdown. Franklin then hit Chance James on a two-point pass and Flomaton stretched its lead to 20-0 with 4:22 left in the first quarter.

On its next possession, Opp got on the board with a 60-yard touchdown pass. The PAT kick was good and Flomaton led 20-7 with 3:35 left in the first quarter.

Flomaton got back into the end zone with 11:26 left in the half on a 29-yard run by Franklin. Johnson then hit Elijah Dunsford for two points and Flomaton led 28-7.

Opp was forced to punt on its next possession and Johnson quickly hit James on a 47-yard touchdown pass. Franklin carried the two-point try into the end zone and Flomaton took a 36-7 lead into the half.

Johnson scored on a 49-yard run with 10:29 left in the third and Franklin carried the two-point try into the end zone to give Flomaton a 44-7 lead.

Opp scored with 4:46 left to play to make the score 52-21 but Flomaton answered when James returned an Opp pass 90 yards for a touchdown and Flomaton led 58-14. 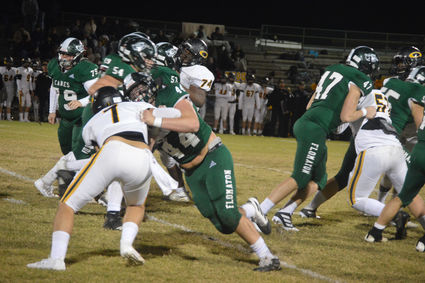 On the night, Flomaton rushed 45 times for 288 yards and hit on one pass for 47 yards for a total offensive effort of 335 yards.

"The coaches did a great job getting them ready during the week," Vickery said. "We had an awesome pep rally, a couple of pick sixes and kickoff returns."

"They're old school and balanced running out of the wing T and the I but they can throw the football," Vickery said. "Once you get to this point they are all tough. Everybody has quality teams, good players and good coaches."