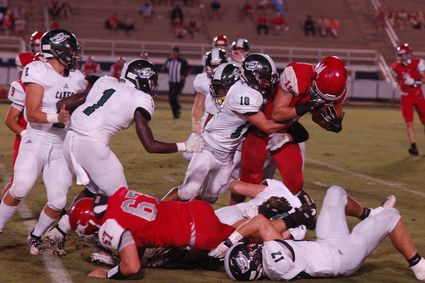 FAIRHOPE – In Flomaton's first true road game of the year the Hurricanes stormed St. Michael Catholic School 53-21 Friday night in Fairhope to move the No. 1 ranked 3A Hurricanes to 4-0 on the season and 2-0 in region play.

Flomaton will step out of region play this Friday night when the Hurricanes host 4-A Escambia County High School from Atmore for homecoming night. Pregame festivities begin at 6 p.m. followed by the kickoff at 7 p.m.

This past Friday night, the Hurricanes jumped to a 29-0 lead by the end of the first quarter and never looked back.

"Even though we dominated the game, there were times we really didn't play well," said Flomaton head coach Doug Vickery. "We missed a lot of tackles and have some things to clean up. But it was a big region win on the road."

With starting quarterback Zeb Vickery sidelined with a season-ending knee injury, Flomaton turned to Daquan Johnson who led Flomaton to the state championship last year and was named the 3A Back of the Year.

"Even in the spring, we worked them both back there," Vickery said of his son Zeb Vickery and Johnson at quarterback. "Daquan was ready to go right in."

Coach Vickery said the decision to move Johnson away from quarterback this season was to keep him fresh for defense. Johnson has verbally committed to Troy as a safety.

Tank Franklin opened the scoring for Flomaton on a 16-yard run with 7:52 left in the first quarter. Johnson carried the two-point try into the end zone and Flomaton led 8-0.

Johnson followed that with a 58-yard touchdown run and then hit Chance James on a two-point try to give Flomaton a 16-0 lead.

Sam Smith scored on a 7-yard run and the PAT kick failed, but with 1:16 left in the first quarter, Flomaton had stretched its lead to 22-0.

Travon Brown rounded out the first quarter scoring on a 20-yard run and Damian Schreiner added the PAT to give Flomaton the 29-0 lead at the end of the first.

St. Michael cracked the scoreboard with 11:49 left in the half on a 22-yard pass from Michael Bradford to Will Edmiston. The PAT was good and Flomaton led 29-7.

Brown put Flomaton back in the end zone with 10:47 left in the half on a 2-yard run. The PAT failed, but Flomaton stretched the lead to 35-7.

With most of Flomaton's starters on the bench, St. Michael scored a touchdown with 4:34 left in the third and added another score with 9:38 left in the game to close the gap to 47-21.

Chris Spann wrapped up the scoring for Flomaton on a 20-yard run with 5:27 left in the game to make the final score 53-21. 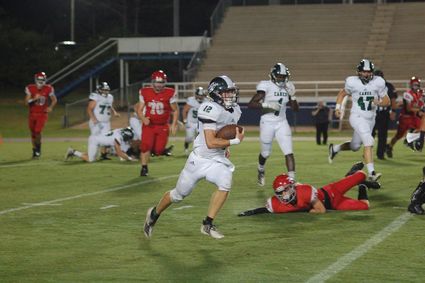 "They are a bigger school and they are having a great season with a lot of talent," Vickery said of the Blue Devils. "It's homecoming and sometimes you get a little worried about all the other activities going on but we talked about that as a team and we had a great practice Monday."

"Our guys are smart enough to know they have a good team and know what type of team they will bring in here," Vickery added. "We've got our work cut out for us."