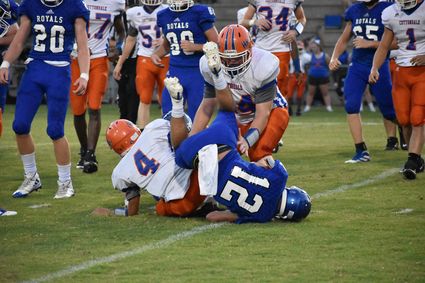 Friday night lights shown bright on Jay when the Royals took home the victory against the Cottondale 40-16 Friday night in Jay.

Jay will be back in action this Friday night when the travel across the river to take on Flomaton in a 7 p.m. kickoff.

Deven Lambeth and Connor Roberts were the stars of the show this past Friday night as they had impressive runs and touch downs during play. In the first quarter, Roberts scored first blood with a 4-yard touchdown run making the score 6-0 in the first. The extra point was no good, but the Royals continued to fight. Lambeth followed up with at 15-yard touchdown run up the middle bringing the score to 12-0 at the end of the first quarter.

In the second quarter Kaden Roberson saw action with an outstanding 36-yard touchdown pass from Judd Smith. The point after was good and brought the score to 19-0 with the Royals in the lead.

Roberts once again got into the action zone during the third quarter with a 4-yard touchdown run bringing the scoreboard to 26-0.

The fourth quarter was an action hauled event by the Royals when Roberts hit on a 13-yard touchdown run. The point after was good and brought the score to 33-0.

Cottondale saw action with an 80-yard kickoff return for a touchdown during the fourth quarter. Cottondale went for the 2-point conversion and made it and making the score 33-8. The Royals didn't go long without answering and Roberts punched in a 5-yard touchdown run. The extra point was good and brought the score to 40-8, Jay. Cottondale had the final answer for the night with at 2-yard punch in run and a 2-point conversion bringing the final score to 40-16. 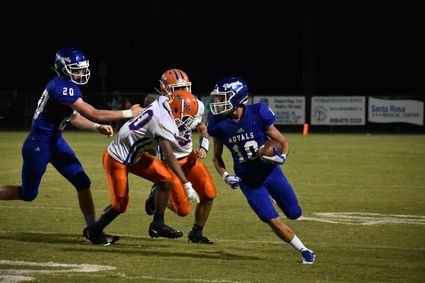 Roberts (12) turns a corner on Cottondale

Roberson and Royals quarterback Judd Smith connected four times for 130 yards for the night. Smith was on point and hit Lambeth for three passes and 32 yards.

Smith ended the night hitting on eight of 14 passes for 190 yards and a touchdown.

Jay ended the night with 190 yards passing and 173 yards rushing for a total offensive effort of 363 yards.

Lambeth rushed 14 time for 78 yards and scored one touchdown and Roberts had 69 yards on 14 carries and four touchdowns.

Defensively, the Royals' Brent Eister and Karden Roberson each had interceptions, but Roberts led the team in tackles with seven tackles and two assists from the linebacker position.