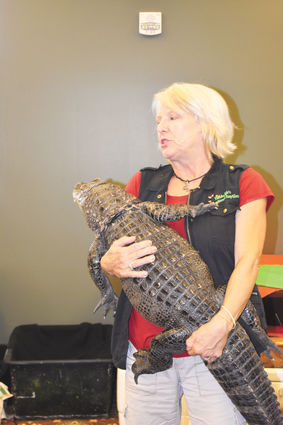 Becky Turner, owner of the Yarbrough Reptile Show, brought her gator, snakes, lizards and more to Flomaton Friday as part of the Flomaton Public Library's Summer Reading Program as students learn a 'Universe of Stories'. This Friday, the Flomaton library will host 'Danenberg Juggling' from 1 to 2 p.m

As part of the Flomaton Public Library 2019 Summer Reading Program's 'A Universe of Stories', the Yarbrough Reptile Show from Oxford, Ala. introduced guests to lizards, snakes, a tortoise and an alligator last Friday!

Owner Becky Tucker showed non-poisonous snakes, such as the King Snake (also called the false Coral snake because of the markings), gray and red rat snakes and an albino Burmese Python. There were also poisonous snakes, such as a copperhead, a "cottonmouth" moccassin, a timber rattlesnake and an Eastern Diamondback rattlesnake, four examples of three out of the four poisonous...