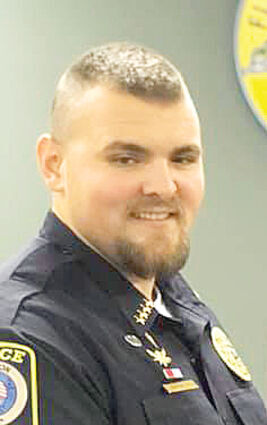 Flomaton Police Chief Chance Thompson submitted his letter of resignation to Mayor Dewey Bondurant, Jr., Tuesday noting he will step down from the chief's position on Sept. 27.

Thompson, 28, is a 2013 graduate of Flomaton High School and began working with with the ambulance service while still in high school. He joined the Flomaton Police Department in 2014 and was named chief on Oct. 5, 2019.

"This resignation is made in full personal confidence with no party or other person pressuring me or demanding me to do so," Thompson wrote in his letter. "This resignation is not made in lieu of disciplinary actions of any kind and should be attested by the mayor of the town of Flomaton."

Thompson said he appreciated the opportunity to serve as Flomaton's police chief and the support he received from the town council, the mayor and the citizens of Flomaton.

"I have served the town of Flomaton and its citizens with every piece of my being from the year of 2014," Thompson wrote. "I personally strived to always hold myself with highest level professionalism, ethics and integrity. The town of Flomaton sent me to the Alabama Criminal Justice Training Center Police Academy and I full heartily feel that I served this town and its citizens with all my heart repaying such debt."

"I feel that I have given a part of my life to this department with much of my personal time to make the public appearance outstanding, including audio visual promotional videos for the citizens of such to be proud," Thompson stated in his letter. "One of my ways was trying to always avoid cost to the town in matters of budget maintenance."

Thompson added that during his tenure with the police department he watched over and designed police tactics to combat the on-going narcotic issue in Flomaton.

"I have implemented programs for churches and businesses to be checked every night to ensure that they are secure," Thompson stated. "I was able, after the outpour of support from our community, to host a Junior Police Academy where 40 or more children, from all walks of life, attended to learn about the way law enforcement works. I took great responsibility to review and construct policies in compliance with Alabama law to ensure our officers were always held to the highest standards applicable."

Thompson noted some of the programs he started that included the Incident Command Trailer usage, the 'How Are You' program for the elderly, a drone unit and the K-9 unit.

"I am proud of our police officers and dispatchers that this department has and believe they will continue to serve our town in the professional manner they have been under for the next Flomaton chief of police," Thompson wrote.

"I made this decision with much thought and prayer," he stated. "My number one goal for the police department was to see that it succeeds, and that it was the most professional police department in our area. I took that goal personally. I believe my goal and work was shown great appreciation when I was presented the 'Outstanding Community Service Award' this year from the mayor and council. I hope with all my heart the next officer given the rank of chief of police has the same goal and outlook as myself."