No clues in drive-by shooting

Children inside the Century house that is riddled by shotgun blast 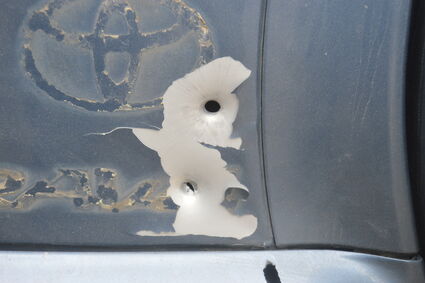 A woman sleeping in a house on Ashford Alley in Century said she was awakened about 4 or 5 a.m. Sunday morning by the sound of gunshots and pellets from a shotgun coming through the house.

"I was in the house asleep and heard the shots," the woman, who didn't want to be identified, said.

She said she heard five shots and the house and a car parked outside were full of pellet holes that appeared to come from a shotgun using buckshot.

"It's not right," she said. "As far as I know, we have no enemies. We've got four or five children in the house."

No one was injured in the drive-by shooting ac...