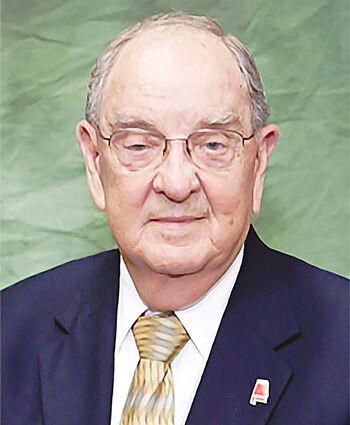 Editor's note: The following column concerning the death of former Atmore Mayor Howard Shell, who died Saturday, Aug. 21 at the age of 88 was written by Michelle Gerlach, former publisher of the Atmore Advance.

Wordsworth wrote, "There are in our existence spots of time ...."

This image captures what will forever be a defining one for me. It was 2004. Ivan had ripped the Gulf Coast apart, and Atmore and other parts of Escambia County had taken a good beating. If memory serves, this was Thursday afternoon or Friday morning, after the storm had moved through on Wednesday night/Thursday morning.

I can see the stress on Mayor Shell's face. I hear the pleading in his voice as he "explained" to a young Congressman, Jo Bonner, how bad things were. With the help of that "young man," as he was forever known to Mayor Shell, things began to change for us.

If you have never worked closely with a public official who really cares, you don't realize that the hours are long and hard, and that those elected to serve often feel parental responsibility for their people. Howard Shell was that kind of mayor. Jo Bonner was that kind of Congressman.

When I moved to Atmore to run The Advance in 1990, it was as polarized politically as the nation is now. I could write an editorial that disagreed with the mayor, and I would get calls from half the town, urging me onward. I could agree with him, and the other half would call. One would even send flowers.

Howard understood something about politics that many people seem to have forgotten: We may not agree today, but we can disagree on this point and work together on another issue tomorrow.

I shall never forget the day he called me and said, "You make me so (expletive deleted) mad, I want to come over there and break your pencil."

To which I replied, "If you wouldn't behave like such an (expletive deleted), I wouldn't have to write these things."

Then we laughed and met for coffee. It was not the last time we disagreed, but we always moved on to the next thing, and worked together on many projects. After I left the paper, he often stopped for a late supper at the restaurant. He'd wait until after the crowd mostly left, ease into "his" booth – the back one, also "Tommy's" booth – and say, "Tell Tommy to cut me about a 4 ounce filet." We often slowed down and ate supper with him. Sometimes, we'd be lucky enough to eat at the Shells' house for Sunday dinner. Nanette would make Howard drive to Excel – where she believed the IGA had "fresh chicken" – and she'd cook it in a cast iron skillet the way the Lord intended.

There was another defining moment in Howard's leadership. This time, the location was the Capitol. We were in the governor's office with his people – three members of the Industrial Board, the mayor, a lobbyist, and the governor's chief of staff, legal counsel, prison commissioner, and assistant commissioner. That day, an agreement began to be hammered out for the City of Atmore to acquire property at I-65 from the State of Alabama.

The rest, as they say, is history. A lot of people worked together to make that happen, but Mayor Shell was the one who was willing to stand up and take the criticism for what he believed to be the best thing for Atmore, and let the chips fall where they may.

There were some lean days for the city, financially, after that. I never fully understood how Howard and City Clerk Becca McDonald managed to cover the bond payment until that property began to develop. But I would hate to think of where the city would be if that had not happened.

He was not perfect. But he was a careful steward of his city, a loyal friend, and a father figure to many.

Howard left us Saturday. I heard he lay down to take a nap and never woke up. I hope that when he got to the other side, Nannette had some chicken fried up in a cast iron skillet, and some cornbread and fresh vegetables to go with it.

Godspeed, Mayor Shell. You will be missed.