Lufkin family donates uniforms to honor their father and grandfather 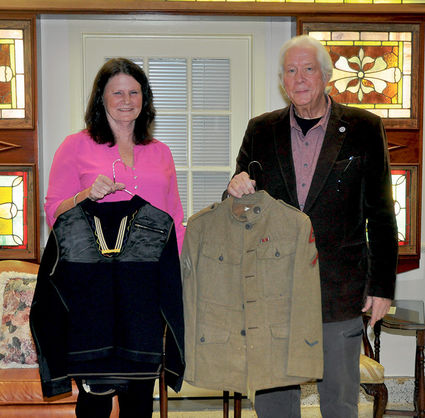 Pat Lufkin hands over uniforms to Don Sales at the museum

Atmore native Jack Curtis Lufkin died Feb. 26 at the age of 94, after serving his country and his state and especially loving his family. Lufkin's legacy and the legacy of his father Sewell Mariotte Lufkin, Sr., will continue to live inside the Thomas E. McMillan Museum on the Brewton campus of Coastal Alabama Community College through a gift from the family of Sewell's World War I Army uniform and Jack's World War II Navy uniform.

Jack Lufkin's daughter, Pat, said after her father's death and during the cleaning-out period they found the two old military uniforms.

"We really didn't know what to do with them but we decided to donate them as a way to honor their service," Pat Lufkin said.

That search took her to the museum at Coastal in Brewton.

Don Sales, director of the Thomas E. McMillan Museum in Brewton, received the uniforms as a gift from the Lufkin family with open arms.

Sales, who has served as the museum's director for six years, said the museum has a military exhibit but he wants to expand it to include more local memorabilia.

"COVID has slowed us down, but we are getting a lot of stuff to make a second exhibit," Sales said. "We've gotten things from World War I, World War II and even things from the Civil War and wars in between," he said. "These uniforms will be a great addition to the museum and I thank the Lufkin family for thinking about us."

Sales said part of the military exhibit includes a complete library of books of all the wars the United States has fought in back to the 'Bloody Mohawk' war when settlers first arrived.

Jack Lufkin grew up in Atmore and graduated from Escambia County High School and enlisted in the Navy during World War II.

He later graduated from Auburn University and received a master's degree from Troy State University.

Lufkin also spent several years as a member of the Alabama Board of Pardons and Parole.

Sales said the museum is normally open from 9 a.m to 4 p.m. Tuesday, Wednesday and Thursday but is still temporarily closed due to COVID restrictions which he hopes will be lifted soon.