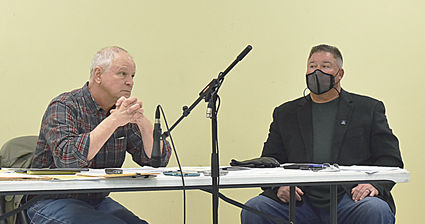 The Century Town Council agreed to enter into a 5-year contract with the Florida Department of Corrections (FDOC) following negotiations to higher water, sewer and gas rates for Century Correctional Institute (CCI) that could bring the town as much as $181,000 a year and include a built-in 3 percent Consumer Price Index (CPI) with the requirement that the town forego further pursuit of payment for incorrect gas billing for years past.

"It's really the town's responsibility to bill correctly and to find it in a timely fashion," said Prather. "Some of these billings go back to 2009. Legally, you can't go back more than five years. My whole goal through this whole process was to negotiate, as opposed to litigate."

Prather reiterated that with the built-in 3 percent CPI rate adjustment, that minimum of $4000 a month will have a 3 percent increase, so it will go up annually.

Prather said the FDOC is a huge part of Century's financial foundation and this contract is extremely important for the town. He said the contract is worth several millions dollars over the next 5 years.

"We took the old rate formula and threw it out," said Prather.

"We really need that in the summertime," said Prather. "That monthly base fee keeps the gas system solvent through your summer months. That's something the town has struggled with over time."

"That's a 170 percent increase of margin, or another $66,000 that will go in the gas system as net revenue," said Prather. "That's a game changer for our gas system."

The contract will offer up to a 3-year renewal option. Prather said that the sooner the contract is in place the better.

He said FDOC spent money with attorneys to draft the contract so that saved the town money, although Town Attorney Matt Dannheiser will finalize the utility services agreement with the FDOC and present it to the council as soon as that is done.

Councilman James Smith expressed concern about the amount of back bill collection and asked about requesting five years of backpay.

Prather said that in the negotiations, FDOC made it clear that the larger the backpay got, the smaller the rate increase got.

"Instead of chasing old money, we went for new money," said Prather. "You're going to get it year after year."

He said the most the town would have gotten would be about $200,000 or less, and the new contract will cover that in about a year and a half and now the new contract includes the $4,000 base fee.

"I don't think they would've agreed to a $4,000 base fee if they had to write us a check for $100,000 for natural gas," said Prather. "Spring of next year, those CPIs are going to kick in. There was give and take but I think they would've been less willing to negotiate if we chased that back money."

Smith agreed it was the town's fault for the oversight but that this will give the town a chance to get back in the black.

Prather said if the town was still under the old contract, the CPI would have been 1.3 percent on $2.28, which is only about 2 cents and the contract will allow a minimum of about a 40 cents increase.

"You can't beat that," said Councilman Smith. "That's a great step moving forward. To see anything in the green is excellent. Things have been mismanaged for years, so now that things are progressing properly it's a great thing. That will be huge for the town."

Prather said the next step is to have Dannheiser review the contract before it is presented to the council for final approval. He said there were a couple of places wording needed to be changed and pointed those out to council members.

Councilwoman Dynette Lewis expressed concern that the contract covers all facilities at CCI, including staff housing. Prather assured her that all of it is included, citing that some items from the previous contract were on the new contract.

Prather also suggested an audit of CCI billing on a regular basis so that the incorrect back billing may be prevented from happening again. The bill is summary billing although it is listed separately on the bill which makes an audit very important. Discussion led to who would be responsible for that audit and Prather suggested that having more than one set of eyes see the bill in the future will help avoid problems with the town's largest utility customer. He said when the five years is up, the contract can be renegotiated and the suggested continuous audit will benefit the town when that time comes.

In a motion made by Councilman Smith and seconded by Councilwoman Sandra McMurray Jackson, the motion carried unanimously.

The next council meeting will be at 7 p.m., Monday, March 1, at Century Community Center on Highway 4.