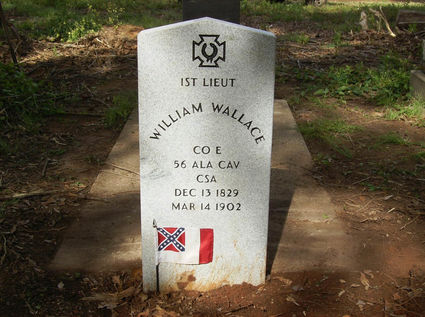 How a society deals with death and remembrance says a lot about the nation as a whole and our society is unwinding daily.

As the War Between the States closed, and many wanted to put away any memory of this great national sadness, organizations began to emerge in the South to retrieve the Southern dead from far flung battlefields and honor them. The Ladies Memorial Association (LMA) arose to establish chapters around the South for the purpose of retrieving the dead and reinterring them in Southern cemeteries.

The LMA began in Winchester, Virginia in 1865 when Mary Dunbar organized a group of ladies to give proper burial to Confederate dead whose bodies were scattered over the countryside around Winchester.

In the summer of 1865, Winchester women appealed to newspapers for financial aid.

The LMA existed decades before the United Daughters of the Confederacy (UDC) was formed and provided a noble, honorable and heroic effort towards remembering the dead and ensuring a respectful burial for them. The lives they lived and, the lives of those who cherished those lives, mattered as much as those living today. Yet today some people oppose the presence of monuments to their memory.

Many in our area have Confederate ancestors in our ancestry. Will we spit on the memory of our grandfather's grandfather in order to avoid the politically correct ire of the left or to avoid our name being placed on some Stalinistic black list?

I encourage you that the better choice is to stand up for what you say you believe. As we can see in the news media, the next target of the politically correct will be those with Christian heritage. Where will it stop if we stand idly by?

Where it stops is with the destruction of our history and the establishment of a collective amnesia by society. Indeed, some are all too ready to sell out their history at a cheap price to groups such as BLM and ANTIFA, perhaps they do so in the hope of avoiding riots and destruction by others who follow, or perhaps they just don't care.

In Pensacola, the city council is preparing to vote to take down the Confederate Memorial in Lee Square. The Left would tell you the monument is a racist, pro-slavery monument that seeks to "rewrite the history of the Civil War" (this according to what looked to be a Millennial aged college professor on a local television station. It seems they could have gotten "the other side of the story," by interviewing someone with an opposing view but other viewpoints have no place in what some might call yellow journalism). I also suppose the implication is that since a college professor stated his opinion there is no other opinion worthy. Yeah, right.

The hate-filled rantings of the Left as to the monument is a hysteria induced lie. According to Pensacola news papers from the late 1880s to 1890s, the monument was actually to honor the Confederate dead from the war. The War Between the States, which is really what the "Civil War" was, saw the death of thousands of brothers, husbands, fathers, sons, grandfathers and others. People fight wars for many different reasons but people in that time period fought to protect their homes and states from a northern invasion. To say that war was about one issue above all others to the people who fought it is intellectually dishonest or shows a lack of knowledge of history.

I find it interesting to read the rantings of Leftist loons on Facebook. I have ran across more people with a "history degree" than at any other time in my life in recent weeks.

They love to rant that Southerners were "traitors" and deserve no monuments. It's ironic to note that the Federal government never prosecuted Southerners as traitors. Indeed, Grant made an agreement with Lee to parole all Southern soldiers and they could take their side arms and horses with them.

This was a wise act of reconciliation by a Northern general who knew we were all Americans and who knew the nation needed healing and not retribution. We could learn from that act of reconciliation today, if we studied history. Furthermore, when Northern politicians threatened to invalidate the deal that Grant and Sherman made with Lee and Johnson to end the war, both US generals threatened to resign. Doesn't sound like they wanted the Confederate veterans treated as traitors.

Which brings us back to Pensacola's Confederate Memorial. According to an article Pensacola historian John Appleyard penned for the Pensacola News Journal in 2017, the monument has a long presence on the Pensacola historical scene. In the late 1880s, Appleyard writes, Governor Perry, himself from Pensacola, was disturbed when he discovered that Florida was the only Southern state that had not erected some form of memorial to veterans and those who had died in the war.

He began to seek a state-sponsored monument, but upon leaving office he had failed in his attempts. After his death, his widow began to bring together women from leading Pensacola families for the purpose of the establishment of a memorial in the city of Pensacola. This lead to the establishment of the memorial to the Confederate dead, which was carried to Pensacola by the L&N Railroad free of charge. The ceremony was conducted at the placement site on Cage's Hill.

Most people favor leaving the monument standing, just as most Mobilians had favored leaving the Admiral Semmes statue in place. There should be a vote of the people on the issue of the Pensacola statue. Yet today politicians want to deprive you of your voice in that protestors have more of a voice with politicians than those going to their daily jobs. The shrill yells of those who would spit upon the monuments to your grandfather's grandfather has more value attached to it than what polls show is the majority of people's opinion in favor of leaving monuments on their pedestals. The final vote on the Pensacola monument removal is in July so those opposed to its removal still have time to let the Pensacola City Council know you will vote them out of office if they cave to the Left. I say VOTE THEM OUT!

It's a sad sight to watch the implosion of memorials to the dead of America's bloodiest war. Democrats lead the charge but many Republicans are complicit because of their silence and lack of effort to speak up. Republican strategists often take the position their politicians can sit out the issue because, after all, those favoring monuments and history won't vote for the Democrats. Well, we can always just set home and not vote at all. This is because an argument can be made, with a few exceptions, that both parties have failed the American public. I would like for the Republican elected officials in this area to prove they will stand for the monuments and show they are above the intimidations of the Left. Failing to do so should be a litmus test for voters.

People in Pensacola should remember the actions of their city leaders and instead of removing monuments, remove them from office if they remove the monument. Give them a new job if they support removal of the monument to the Confederate dead, there are positions available for picking up trash along the interstate or picking up cigarette butts at the rest areas. Maybe some of them are more qualified for these positions than as politicians. I'd also suggest asking local businesses where they stand on the issue of monuments and Southern heritage and thereafter spend your money accordingly.

I don't oppose people protesting issues that are important to them. I don't oppose people in favor of equality and fair play in the criminal justice system; that should be the goal of any system. I do oppose people thinking they can spit on my ancestors and vilify myself and others who support leaving these historical monuments in place. At election time, I plan to remember the politicians and candidates who sold out history and heritage for a few pieces of political silver. I hope you do the same.