Tales from the old Carney Mill 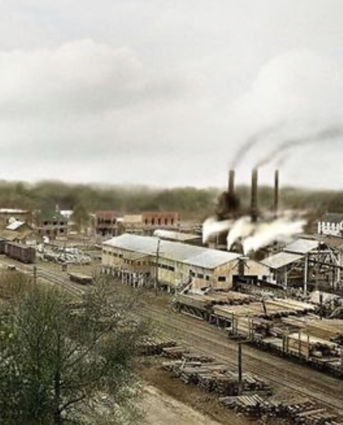 Sawmills during the age of the "Big Cut" could be wild places. A sea of humanity ebbed and flowed through the mills. Laborers, foremen, businessmen and suppliers all created unique personalities inside this great ocean of industry which was dotted with small archipelagos of plainer mills, ripping saws and other industrial apparatus stations dotting the landscape.

These were places where men earned an honest days wage. It was hot work in the summer and cold work in the winter; and it was dangerous work. Stories abound of men injured and killed in the various mills of the area. A newlywed by the name of Reaves had his arm badly mangled at the Peavy mill, he later died. Likewise, a group of laborers at the Carney Mill were injured when a stray piece of wood broke loose from a saw, flew into their group and injured three men in one incident.

Yet few incidents were as macabre as an incident involving a severed leg that stirred the entire town of Atmore to fear and searching for its owner. It is here that our story begins in the early morning hours of a September day in 1915 when a fireman came down to the mill and fired the furnace for the day's operation.

About 9am, he attracted the attention of another fireman who saw him running towards Main Street at a sprint. It was learned that while pulling slabs from the slab pit he had discovered a man's foot and leg. In those days, the slab pit was a place where workers threw out waste slabs of wood and locals disposed of dead chickens and other waste, presumably to be incinerated by the mill as part of its industrial operations.

The presence of the unidentified leg created quite a commotion. The news spread like wild fire; the mill's whistle screamed at the presumed tragedy that a worker may have fallen into a saw or otherwise been accidentally chopped up and disposed in the slab pit. The foreman of the mill was instructed to close the mill and conduct an immediate roll call of workers. Residents of Atmore rushed to the mill to check the condition of their family members who worked there.

Finally, the truth of the severed leg was learned. Near the mill stood Atmore's first hospital, the Baggett Infirmary. Dr. E.N. Sellers was responsible for the establishment of this hospital. On an early September's night a patient was presented to the infirmary showing the serious condition of gangrene. In a life saving surgery, Dr. Sellers amputated the man's leg. Following the surgery, and late into the night, Dr. Sellers walked the severed leg down to the old Carney mill and pitched it into the slab pit and thereby the good doctor had a leg up on the fear driven rumor about the leg found at the mill. For more reading on this story see The Atmore Advance, June 8, 1944.

Available now: The Butler Street Chronicles; Selected histories of the communities surrounding Butler Street and will include information on settlers at Steadham, Pond Fork, Sizemore, Sardine, Butler Street, Hollinger and other communities along this route. Pick up your copy for $15. Copies can be published from the author or at Amazon.com or Lulu.com.