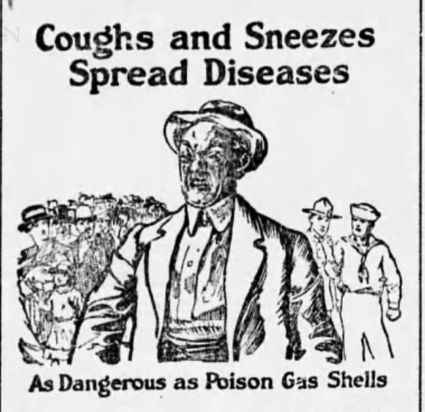 As mentioned in last week's article, the Corona virus is historic in its sweeping across the globe. The virus carries with it the potential for untold consequences in the infection of potentially millions and many deaths to follow.

Yet the virus is not the first time in history that a pandemic has occurred. Looking back at history is the best way to learn what worked and what did not work in earlier occurrences and it also provides a way to learn how to prepare for what may be coming.

The Spanish Flu of 1918-1919 had a dramatic impact on the world. Some believe it indirectly led to the demise of the German war effort. In the US, misinformation on the flu was a constant battle to be fought. In a Tuscaloosa News article from September 22, 1918, the paper stated:

"It [the Spanish Flu] is said to be the same old influenza or grippe that has swept Europe and America time after time for centuries. It may vary a little form the usual strain, but the difference can hardly be appreciated, except by experts." This information was wrong, it was a vastly different and deadlier strain than previous flu seasons and it killed millions. Newspapers were prohibited from publishing just how bad this flu was in order not to dampen war time morale in America.

There was also confusion over how the Spanish Flu was spread and what efforts could be taken to avoid catching the deadly contagion. The Tuscaloosa News reported on November 8, 1918 that the Public Health Service recommended that people avoid those who were spreading the disease by coughing, sneezing and spitting. They also suggested coating the nasal passages with a weak solution of Menthol in liquid petroleum as a protective.

History will judge our leaders and ourselves for our actions during the uncertain days that lay ahead. We do have the ability to know how previous pandemics were handled by our ancestors and what seemed to work and what did not. Whether the actions of those in power today are appropriate or not enough is often left to be decided by generations yet to come.

It can be hard to predict the outcome and severity of today's Corona virus, even with the hindsight of history as our guide. Yet as Jesus said in Matthew 24: 32-33 "Now learn the parable of the fig tree: When his branch is yet tender, and putteth forth leaves, ye know that summer is neigh: 33 So likewise ye, when you shall see all these things, know that it is near, even at the doors." Jesus was speaking of the end times. Our modern times requires us to remain vigilant to ourselves and our families.