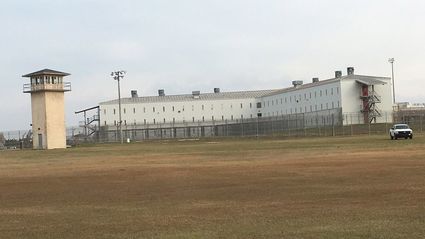 Holman Correctional Facility in Atmore, Ala.

The Alabama Department of Corrections announced Monday it will accelerate the closure of the William C. Holman Correctional Facility in Atmore with plans to transfer an estimated 617 inmates to other correctional facilities.

ADOC said modifications will be made to house death row inmates and maintain the death chamber inside the prison. Prison officials gave no time frame for the "decommission" of the Atmore prison, citing safety and security issues.

State Sen. Greg Albritton said the closure of the current Holman Prison is not tied to Gov. Kay Ivey's plans to build three new state prisons in the state.

"There will probably be accusations that this is a political move to enhance construction plans," Albritton said. "That's not true. What's happening now has no bearing on the construction of new prisons."

Albritton said he went on a recent tour of the prison and called it "a nightmare" and a health risk for prisoners and employees.

He also said Wednesday's announcement came after careful investigations into the prison and the decision wasn't made overnight.

"This is not a made-up crisis," Albritton said. "I've been there."

Albritton also said current employees will either be moved to Fountain or to other correctional facilities.

"The employees we have will be OK," Albritton said. "We're trying to hire more employees not lose any."

In its announcement by ADOC Commissioner Jeff Dunn, he said the plan is to accelerate plans initiated in August, 2018, to close and decommission the main facility at Holman. He noted the prison, which is 51 years old, is one of the department's oldest structural facilities.

"The decision to accelerate the existing plan was made swiftly and strategically by ADOC's executive leadership upon learning of the daily interventions required to maintain deteriorating underground utility systems, which provide essential power, water and sewer services, in order to keep the main facility operational."

"Since my arrival at the ADOC almost five years ago, this department has been vocal about the pervasive and extreme dilapidation crippling facilities throughout the correctional system – and Holman Correctional Facility is no exception," said Commissioner Dunn. "This is a real and serious issue that cannot be understated and, after learning the extent of the risks associated with continued maintenance attempts at Holman Correctional Facility, moving quickly on our plans to decommission was the right and only decision."

He added in the release that the ADOC continuously monitors and performs risk analyses of its aging facilities in an effort to maintain critical systems across the correctional system.

"The current conditions within the Holman Correctional Facility tunnel, in which the main facility's electrical, water, and sewer control systems are housed, now present increased safety concerns and a degree of risk to anyone who enters the tunnel, ultimately rendering ongoing maintenance or repair of these systems unsustainable," Dunn's release stated.

"Protecting inmates, staff, and the general public is of paramount importance to the ADOC, and the 51-year-old Holman facility simply is no longer viable to house a large population of inmates," added Dunn. "Band-aid solutions to any problem of this magnitude are temporary at best and cannot fix the root cause of our collective problem – Alabama's prison infrastructure is failing. We are now projecting upwards of $800 million in deferred maintenance costs alone. This unavoidable issue reinforces the critical importance of Governor Ivey's transformative and necessary plan to build three new correctional facilities."

The main facility at Holman Correctional Facility houses general population and death row inmates, the cafeteria, the medical unit, the administrative suite, and the execution chamber, which is the only component of the main facility that will remain in use. Executions will not be affected, and the ADOC will take all necessary measures and precautions to maintain the integrity and safety of the chamber and its access points. The department currently is working with third-party experts to accomplish this important endeavor.

Upon completion of the decommissioning process, approximately 422 general population inmates and 195 restrictive housing inmates will be relocated to other ADOC facilities. Approximately 150 of Holman Correctional Facility's low-risk inmates serving life without parole sentences will be moved to the facility's standalone E-dorm (formerly the faith-based dormitory) and continue to work at the prison's tag and clothing plants. Holman Correctional Facility's restrictive housing unit will be modified appropriately to house and serve the facility's current 145 death row inmates, as well as 21 additional death row inmates who already have been transferred safely from Donaldson Correctional Facility as part of Phase 1 of this process. The restrictive housing unit, E-dorm, and the tag and clothing plants all have independent power, water, and sewage systems.

The exact details and timing of Phase 2, which encompasses the transfer of Holman Correctional Facility's general and restrictive housing populations, will not be made public in advance for security purposes. The process by which inmates are transferred is routine, and the Department will work diligently to minimize disruption.

"We currently are working hard to identify and implement measures to account for the impact of increased populations across the correctional system, and to ensure continued access to health, educational, and rehabilitative services and programs for our inmate population," continued Dunn. "We will be making appropriate modifications to existing facilities to address concerns associated with relocation including safety, security, staffing, crowding and programming. This is a complex process, and my department is committed to maintaining transparency without compromising inmate, staff, or public safety."

The department will provide updates on its website every Tuesday at 11:00 a.m. outlining important information on its progress for the loved ones of impacted inmates, the media, and general public. Inmate locations will be updated on the website following transfers. Information can be accessed here: http://www.doc.state.al.us/updatingnews.